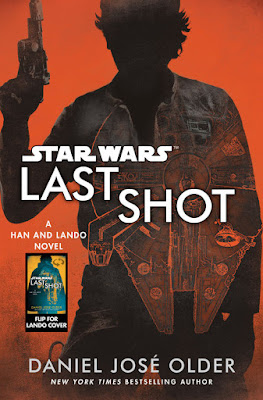 Publisher's Summary
THEN:
It's one of the galaxy's most dangerous secrets: a mysterious transmitter with unknown power and a reward for its discovery that most could only dream of claiming. But those who fly the Millennium Falcon throughout its infamous history aren't your average scoundrels. Not once, but twice, the crew of the Falcon tries to claim the elusive prize—first, Lando Calrissian and the droid L3-37 at the dawn of an ambitious career, and later, a young and hungry Han Solo with the help of his copilot, Chewbacca. But the device's creator, the volatile criminal Fyzen Gor, isn't interested in sharing. And Gor knows how to hold a grudge....
NOW:
It's been ten years since the rebel hero Han Solo last encountered Fyzen Gor. After mounting a successful rebellion against the Empire and starting a family with an Alderaanian princess, Han hasn't given much thought to the mad inventor. But when Lando turns up at Han's doorstep in the middle of the night, it's Fyzen's assassins that he's running from. And without Han's help, Lando—and all life on Cloud City—will be annihilated.
With the assistance of a young hotshot pilot, an Ewok slicer prodigy, the woman who might be the love of Lando's life, and Han's best and furriest friend, the two most notorious scoundrels in the New Republic are working together once more. They'll have to journey across the stars—and into the past—before Gor uses the device's power to reshape the galaxy.


This has probably been one of my favorite canon books to date. The action is there, the slight personable moments are there. It has new characters, but because it ties in characters we know from the movies, we can build a connection to them through the older characters, instead of starting from scratch and having to build a new relationship with very little to go on.

My favorite moment had to be when Older brought a Gungan character into the mix, a guard on a prison moon Han and Lando went to looking for Gor. Han starts off talking to him in the Jar Jar Binks fashion and the guard gets offended, saying not all Gungans talked like that. I died laughing at that point, it was such a neat touch, and one I definitely thought was needed.

The different time periods can definitely throw you off, I know I had to go back and check the chapter header to make sure I was reading the right thing. Thankfully Older does a decent job of keeping settings and characters different in the "x years earlier" chapters. He merges them all together in the present day chapters, so every new chapter takes you to a new setting, one from the past.

Despite this novel being labeled as a Han Solo and Lando book, I really thought there was more focus on this being a Lando origin story almost. Yes, we have a lot of Han in the book, but Older really focuses on Lando, in his past smuggling operations, and his romantic situation with Kaasha. Lando really takes on a new leaf at the end of the book as (I think) he will start up a real relationship with Kaasha.

What is focused on for Han, in the past is his relationship with Sana Starros, a smuggler from Nar Shadda, who had worked with Han on many an operation, and even pretended to be his wife (drawing enormous ire from fans everywhere who agreed Han would not have had a wife in his smuggler days). In the present, Han feels like a failure as a father, and a husband, but whenever he's out in the field like in his smuggling days, it doesn't feel right anymore. The flashbacks to his smuggling days with Sana and Chewy help show a new side of Han, and why being a smuggler still calls to him.

Overall a great book. There are parts that can be slow, and the time hops can be disorienting, but Older did an awesome job. I really hope he returns to write a new story for us.

Got some different thoughts? Wanna talk about the book? Let me know more in the comments below!