EDITORIAL: Three Reasons Rey IS A Skywalker (And Three She's Not) 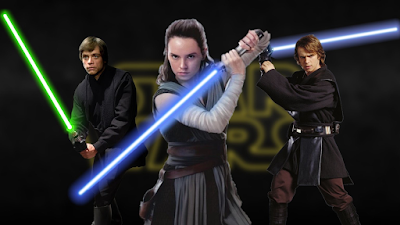 Hi you! Thanks for clicking! You're here, you read the title. I know there's been a lot of back and forth, and I'm just going to stoke the fire, but spoiler alert, I'm for her being a Skywalker. I've heard all the reasons, all the back and forth, I've been told I'm "living in the past". If you wanna discuss reasonably, feel free to reach out to me on Twitter, @kgilstrap13. Be nice though. Trolls will not get responses.

Anyways! What you're here for. There's three reasons I think she's a Skywalker. But I can also see why she wouldn't be a Skywalker, so I'm gonna give you those reasons too. There will be SPOILERS for Episodes VII and VIII below, so please, beware.

Reasons Rey is a Skywalker 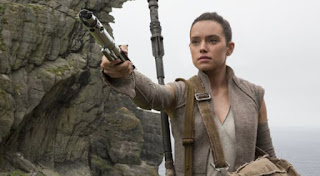 1. Kathleen Kennedy said the Saga Films would Focus on the Skywalkers

"Two types of Star Wars projects are being planned, which Kennedy has labeled "Saga" and "Anthology." "
The Saga films focus on the Skywalker family saga," she explains. "The stories follow a linear narrative that connects to the previous six films. The Force Awakens follows Return of the Jedi and continues that generational story. The Anthology films offer opportunities to explore fresh characters, new storylines and a variety of genres inside the Star Wars universe."

Kathleen Kennedy back in 2015 said the Skywalker family would be the focus of the Saga films, the prequel trilogy and the original trilogy. She explicitly said The Force Awakens follows those films, and therefore implies The Last Jedi and The Rise of Skywalker will be a part of those films.(These movies are hereafter referred to together as the current trilogy). In the statement she uses words like family and generational. This has always put in my head that there should be a Skywalker name in these movies, a live person, the "hero" of these films.

Now I know what you're thinking. It's probably something like:
a. Luke Skywalker is in these movies. He counts!
- He kind of does. But really he doesn't. The current trilogy combines honoring the original three, Harrison Ford, Mark Hamill, and Carrie Fisher, and bringing a new generation in, with characters they can relate to. The new characters are the focus of the trilogy, just like Anakin was the focus of the story in the prequel trilogy, and Luke was the focus of the original trilogy. The current trilogy has primarily focused on the growth and development of two characters. Rey, and Kylo Ren/Ben Solo. Which brings me to the next point you might be thinking of:
b. Ben Solo is the child of Leia and Han! Leia's the child of Anakin Skywalker and Luke's sister. He's a Skywalker!
- Noooo. He's not. He's a Solo. Not a Skywalker. You might ask me what does it matter? The blood is still there. It matters. I'm telling you. What's in a name, what's in a name. It's where you come from. I will give this theory some credit below though, even though I'm not a fan. This is covered under Kennedy's usage of the word 'family', so it could be allowable.You might could see generational, but if you look below, at the bullet point, it states relating to different generations of a particular family. In this case, that particular family is the Skywalker family; Ben is not directly in the Skywalker line, sooooo that's my argument there. (This is pulled from typing 'generational' into Google incase you were curious).

c. The Skywalker name just dies with Luke! It had to happen eventually!
- I'll cover this below
d. REY! Rey's a Skywalker!
- Well yes. This is why we're here. This allows Lucasfilm to play to the 'family' and 'generational' words Kennedy uses. This is the most obvious solution to continuing the Skywalker family, I will admit it. But it is vital to have a third Skywalker to me. It's definitely the biggest symbol, the sagas have all been trilogies, each trilogy in it of itself is part of a trilogy.
Source: Outerplaces 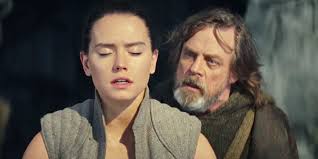 This has been a controversial topic. Rey has been called a Mary Sue by multiple outlets, and multiple people over social media. By no means am I calling her a Mary Sue, I hate the term. But who can pilot a hunk of junk like the Millenium Falcon when they've never been off world before? Sure there are simulations, and speeders, but space is different. If you take a look at Anakin Skywalker and Luke Skywalker, both were gifted pilots, before, and after they left Tatooine. They both were gifted mechanically as well, and so is Rey. Gifts tend to run in the family, and since I'm going to assume Force connection is a gift, Rey could have inherited her Force sensitivity from Luke. Her story is so similar to Anakin and Luke's, making her a Skywalker is an obvious choice.

There are multiple powerful Jedi, but I believe in coincidences! And this is too big of one to let go. 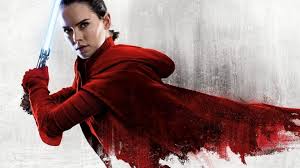 Ok first of all to all yall who have 100% believed him, can we really trust a bad guy? It is a classical manipulation technique, one that's obvious, yes. But I've watched the elevator scene a dozen times, and there's not a time I've watched it where I believe Kylo is telling the truth. The emotional level he has is different than others, but I don't believe for one second he's telling the truth about her parents. This could be information he was given from Snoke, and he distrusts it, but it doesn't make any sense for anything other than pure manipulation to get Rey angry, to get her riled up to try and turn her to Kylo's side to rule the galaxy together.

Besides, why would just anyone drop a child off on a planet, by themselves, in the darkest corner of the galaxy? There could definitely be a factor where Luke, or the mom dropped her off on the planet to protect her, intending to return after a horrible battle, and they gave Unkar Plutt a steady flow of credits for a time, and he protected Rey. But when the credits stopped flowing, he turned her loose, and quit standing up for her.

Reasons Rey is not a Skywalker 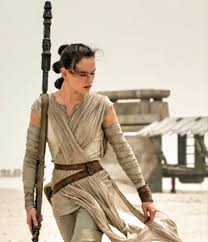 I just argued above that what he said was false, I know. But in all likelihood, what he said was true. He, and Snoke could have had research done on her, found out who really dropped her on that planet. It's 100% possible, and Kylo wanted her to see the truth, and Rey refused to accept it, hence why she got all angry.

It's the unexpected thing to do, and I can totally see Kathleen Kennedy leading JJ Abrams, and Rian through the story idea, letting her be independent, and growing her own story. Breaking free from the Skywalkers, we could see Rey be the hero we idealized in Luke, and putting a common theme throughout Star Wars, be your own hero. 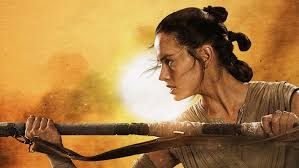 Here, the directors and script writers are just using a backdoor curveball in saying Ben Solo is their link to the Skywalker generation. If this is the case, we should see the redemption arc occur for Ben, bringing him back to the light, and bringing a balance to the Force yet again. I think this is a weak step, but it is possible, so I can't bypass it.

Finally, the biggest point for me on why Rey might not be a Skywalker. Growing the Star Wars story past the Skywalker family, and breaking free to see all angles of the universe far far away. We could see the little people in Star Wars, the obscure characters you'd never thought of being able to come into a better focus, outlining their backgrounds, their history and ideals from beginning to end. The Skywalkers are in the past. And it is time for a new generation to stand up, stand out, and be their own heroes.

We should never let these heroes from our past go completely. We learn from them, they are our foundation. They're what we wanted to be growing up, as we sat twirling broomsticks or pitchforks as lightsabers. But we can't live in the past forever. Eventually repeating stories about the same characters gets old, and therefore we create characters that learned from those characters, and grow to be the new heroes. For the new generation to emulate, like we did for the legendary trio.

Thanks for tuning in guys. Do you have some other theories on why Rey is or is not a Skywalker? Let me know on Twitter, @kgilstrap13. I'd seriously love to discuss.