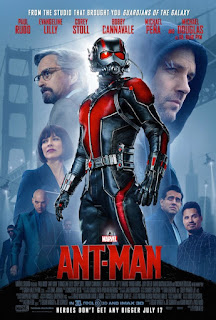 Ant-Man is definitely a light-hearted, funny movie. Casting for every character was 100% perfect, including the villain. Paul Rudd is perfect and Evangeline Lilly is GOALS. Costumes were great, the Ant-Man suit is a teeny bit weird IMO, it does look like the old-fashioned motorcycle suit, but it is an older suit, so I can allow it. Sets were decent, and I thought that it was good this one was different, because having a Marvel movie on the west coast is a decent rarity in it of itself. I enjoyed the plot, it was serious, but at the same time it kept everything lighthearted. The briefcase fight scene between Ant-Man and Yellow Jacket(Corey Stoll) was fantastic, probably one of my favorite fight scenes in the entirety of the MCU. My favorite side character of this film definitely has to be Luis(Michael Peña), he's hysterical.

The movie does have a few issues. The plot doesn't feel developed enough, I feel like I'm missing important details in various spots. Darren Cross/Yellow Jacket feels sorely underdeveloped, and I understand the Langs needed to be included, mostly for Cassie, but I don't feel one connection to them at all. I guess we'll see if there's some building blocks for them in Ant-Man and The Wasp, and possibly even Avengers 4.The movie just feels like its missing something, but I can't put my finger on it.

Not a terrible movie, it definitely has its shining moments.

Disagree? Agree? Let me know in the comments below!

This review was originally published for WOBAM Entertainment.