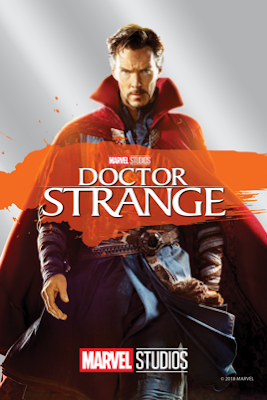 Let's start off with the scenery and costumes. The artistry in this film is simply superb. Everything flows nicely, even in the mirror dimension. It is all fake of course, we all know this (or at least we should) - but it all looks so realistic, and just so fun. The buildings, and roads spinning in and out, and then gravity changes woo! The scenes in the mirror dimension on the roads of New York are just fun, and seeing Strange(Cumberbatch) and Mordo(Ejiofor) fall and try to get out of the mirror dimension just makes me laugh. The costumes were fantastic as well, ancient artifacts and all. The special effects, set design, and costumes were all nominated for several awards, and each won a couple I think.

The acting was all done pretty well. Cumberbatch is amazing, as usual, and the rest of the actors were great. I'm always amazed how Mikkelsen can act as a variety of characters, and he pulls off a great villain here. He really provides a human connection to the main villain, Dormammu, the lord of the dark dimension. Dormammu is actually played and voiced by Cumberbatch! That was a cool fact that I found, Cumberbatch thought it would be a great connection, and Derrickson agreed, because Dormammu doesn't have a physical body, so he mirrors his mannerisms off of Strange, so it all linked together quite nicely. Wong was my second favorite character behind Cumberbatch, he was really neat to watch, and quite hysterical with his love of modern music.

The story was great, I really enjoyed getting to see the doctor side of Dr.Strange, before the accident that sent him off looking for a fix to his injury. His search for a fix, and then getting to Kamar-Taj, meeting The Ancient One, all of his journey was intriguing. The introduction to magic, and the multi-dimension was so well done, the beginning to introducing mystics in Marvel needed to be done carefully, and everything was. From kicking Strange out of his own body, the mirror dimension, everything. Pure awesomeness

Strange proceeds to learn more about magic, and it is great seeing his interactions with the masters, and learning in the only way a science man truly can. By questioning everything! It all comes to a standstill though when the Sanctums are attacked, and Strange has to "grow up" really fast. He was experimenting with the Eye of Agamotto, and ends up using it the rest of the movie, in his awesome sequence with Dormammu (which we have no idea how long they were actually in that time loop, but it has been said we will find out). The sequence with Dormammu is definitely one of the most popular scenes from the movie. Even if you haven't seen the movie, you've probably heard of it or watched it on the Youtube. But in case you haven't, I've put it right below!

Overall a fantastic movie. What did you think? Let me know in the comments below!