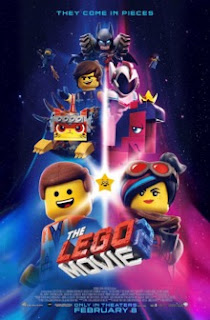 The LEGO Movie Part 2: The Second Part is a fairly average sequel. It is set after The LEGO Movie, LEGO Batman, and LEGO Ninjago. It hits the mark for a kids movie, it's cute, has a great overall theme, some great laughs, and it has some great songs, (that definitely will get stuck inside your head). For the parents, it has some fantabulous easter eggs, takes some shots at fandoms, and misses the mark on plot when it comes to a close.

The movie really amps it up this go-round in terms of a quasi musical. The first movie made heads spin with the song “Everything is Awesome”. People have been singing that song ever since, and it always manages to turn up a smile. This movie tries to hit that same mark, and while the songs are quite catchy, they won’t live on as long as “Everything is Awesome” has, and will continue to do. They will get stuck inside your head though, I can promise you that.

As far as laughs, Part 2 does not have as many as the original, but when there are laughs, they’re great. They’re more aimed for the adults, with subtle easter eggs I won’t go into, and shots at fandoms. I will say, it is nice to see the DC Films cast pop in for some of their characters. Margot Robbie returns for Harley Quinn, Gal Gadot, and Jason Momoa return for their respective roles of Wonder Woman and Aquaman. There’s another special appearance made, but I can’t find anywhere it was publicized, and I’m not sharing spoilers. It’s a cute movie, with the theme focusing in on the saying “sharing is caring”. It meets measures of cuteness but still has elements to keep all the kids involved and listening the entire movie. The theme works well into the plot, but the plot fails to meet expectations of originality.

As an adult, I could predict most of the turns in the movie, and the “surprises” that happened. Everything seemed to be pulled from a different movie, so if you’ve seen a lot of movies, don’t expect to be surprised. Shock is not something to be had in this movie. We do get more live action segments in this movie, and they actually tie into the overall LEGO-reality rather well. The movie is a nice escape into a child’s reality though, and it’s a reminder imagination should never leave us because the LEGO-reality is still a great concept. Most of us can relate to the playing with LEGOs or action figures or dolls and pretending they were real, and seeing them on the big screen is such an amazing idea. The camera work and CGI is still phenomenal, as it was in the original.

The character development in this movie is ok, not phenomenal as in the original. We see more growth out of Wyldstyle(Elizabeth Banks) than any other LEGO figure, Emmet(Chris Pratt) included. Finn(Jadon Sand) and Bianca(Brooklynn Prince), the children of “The Man Upstairs”(Will Ferrell), also do some growth in this movie, being the main focus of the live action segments.

Overall, the movie is ok. If you’re looking for something that matches the original, or even LEGO Batman, definitely lower your expectations because it doesn’t hit all the marks. But, if you want a return to an imaginative place, and your childhood, definitely check it out.